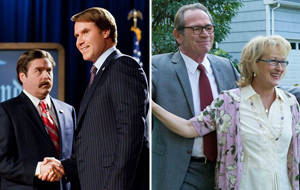 - Combining two of the most popular comedic actors of right now is guaranteed to draw significant interest.
- Dinner for Schmucks aside, director Jay Roach has a strong box office resume with the Austin Powers trilogy and first two films in the Meet the Parents series.
- Being an election year could elevate the relevance of this for audiences.
- Ferrell rarely (if ever) misses in the summer.  The Other Guys, Talladega Nights, Step Brothers, and Anchorman all had strong legs in late July and early August (and all adjust to at least $109 million today with ticket price inflation).
- Besides Ted possibly, this is the only broadly appealing comedy of the summer and audiences will be starved for something light.

- We haven't had many lately, but past political comedies have been tough sells at the box office.
- The other male-centric early August releases (The Bourne Legacy, Total Recall, The Expendables 2) might cut into this more than they will Hope Springs (which does have Sparkle to contend with).

- While there's likely a lot of overlap in their respective fanbases, Streep and Carell together could be a slightly bigger draw than either on their own.
- Carell and Streep each consistently open films to $20 million or more and they're usually leggy. In addition, both have a lot of success with late summer releases (Crazy, Stupid, Love. and The 40-Year-Old Virgin for Carell, The Devil Wears Prada and Julie & Julia for Streep).
- Adult women and older audiences could latch onto this.  There's not much out there for them this summer.
- There will be inevitable Oscar talk for Streep and Jones.

- Carell's younger audience won't be interested in this, so the opening will rely more on Streep's appeal.
- There could be some potential overlap between the audience for this and The Campaign, with the latter almost certain to be stronger out of the gate.

Notable changes on our forecast this week include Brave, Abraham Lincoln: Vampire Hunter, Seeking a Friend for the End of the World, Ted, and Magic Mike.