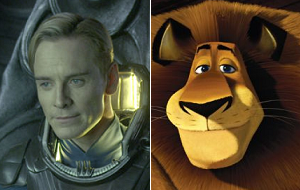 Prometheus, an R-rated sci-fi flick, is poised to fend off family-friendly Madagascar 3: Europe's Most Wanted at the box office this coming weekend.

Every trailer or piece of promotional footage for Prometheus has been met with a wave of deafening buzz. Director Ridley Scott's return to the Alien franchise is being welcomed with open arms by sci-fi enthusiasts around the world—it bodes well that Prometheus has already taken in more than $40 million abroad. Yet the 20th Century Fox release will be much bigger if people who aren't die-hard fans of the original Alien films show up. Prometheus' R rating won't be easy to overcome, but R-rated sci-fi can perform well if it clicks with mainstream moviegoers. (See the Matrix trilogy.)

Prometheus is doing quite well on Twitter, but its official Facebook page doesn't boast nearly as many likes as the TRON: Legacy page did at the same point in the release cycle.

As of 3 p.m. PT, Fandango reports that Prometheus is responsible for 42% of daily sales.

Look for Prometheus to grab $51 million from around 3,300 locations during its debut frame.

Madagascar 3: Europe's Most Wanted should benefit from the fact that it's the first true family-friendly release of the summer. 2008's Madagascar: Escape to Africa opened to $63.1 million domestically on its way to a healthy $604 million worldwide. While some drop-off is to be expected with a 3 1/2 year gap between films, taking the franchise to Europe should ensure healthy receipts abroad. The North American tally doesn't have to be huge for this animated flick to be a hit. After all, only $180 million of Escape 2 Africa's worldwide haul came from North America.

Fandango reports that Madagascar 3 is responsible for 35% of daily sales.

Expect Madagascar 3: Europe's Most Wanted to grab $49 million from around 4,000 locations during its debut frame.