Weekend Predictions: 'The Amazing Spider-Man,' 'Katy Perry: Part of Me 3D' and 'Savages' 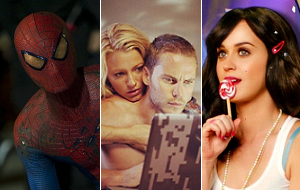 The Amazing Spider-Man will claim the top at the box office this coming weekend—but tough competition from holdovers may dilute its strength.

Is it too soon for a Spider-Man reboot? Maybe. It's only been a little more than five years since Spider-Man 3 triumphed at the worldwide box office with $890.1 million despite being plagued by negative reviews from critics and fans alike. Much like Batman Begins, The Amazing Spider-Man has to overcome a lot of skepticism. Unfortunately, critics are not being as kind to TASM as they were to Christopher Nolan's first Batman flick—a lot of influential critics have trashed the reboot. A lukewarm critical reception is a strong indicator that word of mouth could be mixed—not a good thing when it comes to getting audiences to trust a reboot.

It doesn't help that TASM will have to compete with Ted and Magic Mike, two films that are coming off strong debut frames. Both Ted and Magic Mike are controversial in all the right ways, and they've become must-see films for plenty of moviegoers. There's no doubt that they'll hurt Spidey.

TASM's $7.5 million midnight debut ties Iron Man 2's midnight gross. Not a bad start by any means, but certainly not one that indicates a break-out week.

Look for The Amazing Spider-Man to rake in $127 million from Tuesday-Sunday, $60 million of which should come from Friday-Sunday.

After delving into PG-13 territory with World Trade Center, W. and Wall Street 2, Oliver Stone returns to the world of hard-R dramas with Savages, a star-studded ensemble flick. Savages is full violence and sex, which means it will represent a viable alternative for adults who are sick of a summer full of safe, PG-13 movies.

Expect Savages to take in $14 million from around 2,800 locations during its debut frame.

Katy Perry: Part of Me 3D will likely end up closer to the $19 million domestic haul of Jonas Brothers: The 3D Concert Experience than the $73 million gross of Justin Bieber: Never Say Never. Even though Part of Me represents a nice bit of counter-programming, the market is just too crowed right now. Still, teenage girls will appreciate an alternative to the explosions and fights found in TASM.

Katy Perry: Part of Me 3D should take in $12.5 million from Thursday-Sunday.