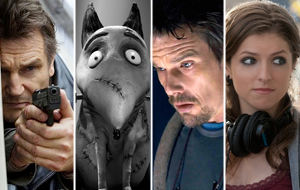 - The first film was a genuine surprise hit that moviegoers really liked, especially judging by its holding power.
- Not having to deal with the Super Bowl (as the first film did) and this being a first sequel could both help build upon the $24.7 million opening weekend performance of Taken.
- Liam Neeson delivered solid post-Taken opening weekend performances with both The Unknown and The Grey.

- The first film caught lightning in a bottle at the box office. It can be very hard to duplicate that type of success as a sequel.
- There's little doubt that holding power after opening weekend will be much softer this time around.

- Tim Burton has a built-in audience and this film should appeal to that audience greatly.
- Expanding upon that, Burton's and Disney's most recent collaboration helped result in the mega-hit Alice In Wonderland.
- Disney's experience in marketing family fare.
- Halloween and the lack of direct competition after it opens could lead to solid holding power.

- Burton's style and black and white films are very tough sells to family audiences.
- Opens only one week after Hotel Transylvania, which could limit opening weekend demand a bit.
- While the Burton-Disney connection helps, will anyone outside of Burton's built-in fanbase want to see it?
- As recently seen with both Dark Shadows and Abraham Lincoln: Vampire Hunter, there is a good chance online signs could be inflated for this.

- The strong history of Lionsgate when it comes to marketing horror films and thrillers.

- Will moviegoers want to take a chance on a film that investiages found footage film, especially when they can wait two weeks to see Paranormal Activity 4?
- Opening up against Taken 2 makes for a tough challenge as well.

- Could serve as an alternative choice for female moviegoers and teenage moviegoers.

- Anna Kendrick is untested as a draw at the box office on her own.
- Unlikely to appeal beyond its target demos given the number of other choices that will be in the marketplace at this time.

Notable changes on our forecast this week include The Expendables 2, ParaNorman, Sparkle, The Odd Life of Timothy Green and Trouble with the Curve.