Weekend Predictions: 'The Bourne Legacy,' 'The Campaign' and 'Hope Springs' 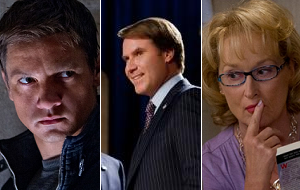 It's tough for any franchise to survive without the star that made it popular, but it can be done. Universal is hoping that fans will take to Jeremy Renner in the same way that they embraced Matt Damon's Jason Bourne. There's a lot of money riding on it. Universal's desire to keep the franchise going is understandable considering that 2007's The Bourne Ultimatum took in $442.8 million worldwide. Unfortunately, the enthusiasm just isn't there for Legacy. Critics are not being kind, and activity on Facebook and Twitter is less than stellar.

Look for The Bourne Legacy to take in $34 million from more than 3,600 locations during its debut frame.

The Campaign is perfectly timed. If the election-themed comedy was coming out in October or November, moviegoers would probably be so sick of listening to enough real-life political bickering. As it stands, the mood is just right to take a dig at how knucklehead politicians duke it out constantly. Of course, it doesn't hurt that the combination of Will Ferrell and Zach Galifianakis is a comedy fan's dream come true. This one can't miss.

Expect The Campaign to take in $26 million from around 3,250 locations.

Hope Springs will appeal to the same over-35 crowd that turned The Best Exotic Marigold Hotel into a worldwide hit this year. Adults are unfairly overlooked during the summer months, and when a film comes along that deals with genuine adult emotions and concerns it can succeed in a big way. For proof, look no further than last August's The Help, a $210.7 million worldwide hit.

Hope Springs should grab $19 million from Wednesday-Sunday, $14 million of which will come from Friday-Sunday.