Weekend Predictions: ‘The Expendables 2,’ ‘The Odd Life of Timothy Green,’ ‘Sparkle’ and ‘ParaNorman’ 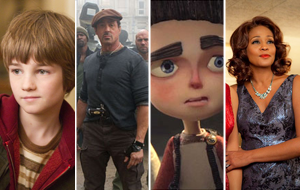 Lionsgate's The Expendables 2 is set to lead this weekend's box office with ease, while three other wide releases also enter the marketplace.

With The Expendables 2, Lionsgate will hope to build on the crowd-pleasing success of the first film, which opened with $34.8 million and went on to finish its domestic run with $103.1 million. In addition to returning stars Sylvester Stallone, Jason Statham, Jet Li and Dolph Lundgren, the cast of The Expendables 2 has expanded to include Chuck Norris, Jean-Claude Van Damme and larger roles for Bruce Willis and Arnold Schwarzenegger. The film's cast as a whole is a nostalgic dream for fans of 80s and 90s action movies, an audience whom should be ready for a second helping of the franchise this weekend.

The Expendables 2 has been especially strong on Twitter this week, as Twitter activity for the film is greatly outpacing the activity levels of the first film two years ago.

Expect The Expendables 2 to lead the way this weekend with $40 million from an estimated 3,200 locations.

This weekend's other three wide releases could end up fairly bunched together over the frame, with Disney's The Odd Life of Timothy Green appearing to have the best chance of emerging from the pack. The family film starring Jennifer Garner, Joel Edgerton and CJ Adams has seemingly come out of nowhere thanks in part to an effective campaign by Disney and now has surprise hit written all over it. Anticipation for Timothy Green appears to be high among family audiences and the film will have a good chance of holding up well in the weeks ahead.

On Twitter The Odd Life of Timothy Green had been generating slightly lower activity levels than ParaNorman earlier in the week, but the tide has turned in the favor of Timothy Green today now that it is already playing in theatres.

Look for The Odd Life of Timothy Green to bring in $22.5 million during its first five days of release, with $15.5 million of that total coming from the weekend. The location count for the film as of Wednesday is 2,551.

Sony's Sparkle, a musical drama starring Jordin Sparks and the late Whitney Houston, appears likely to get off to a solid start this weekend. Fans of Houston will no doubt want to see her final acting performance, but at the same time Sparkle could have trouble appealing to moviegoers outside of Houston's fanbase given all of the other options in the marketplace at the moment. Sparkle hasn't been lighting Twitter on fire thus far this week, but it has been outpacing the Twitter activity levels of Joyful Noise earlier this year.

Expect Sparkle to gross $13.5 million this weekend from an estimated 2,200 locations.

ParaNorman looks to be drawing the least interest of the weekend's four wide-releases, but should still have a presence at the box office. The 3D stop-motion film marks the second collaboration between Focus and animation studio Laika; the first being 2009's Coraline. It appears as though family audiences will be choosing Timothy Green over ParaNorman, though ParaNorman also has some advantages that could keep it within shouting distance of Timothy Green over the weekend, including a larger location count (estimated at 3,100), 3D surcharges and a Friday release date.

Look for ParaNorman to take in $13 million over the weekend.

As for last weekend's releases, look for both Universal's The Bourne Legacy and Warner's The Campaign to take big second weekend hits from The Expendables 2. Sony's Hope Springs on the other hand should hold up rather well this weekend.

Check out the rest of our weekend predictions in the table below.