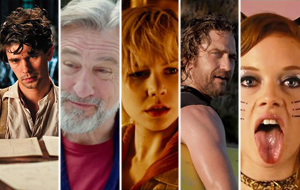 Five new releases have been added to our Long Range Forecast this week.  Cloud Atlas, The Big Wedding, Silent Hill: Revelation 3D, Chasing Mavericks and Fun Size are all scheduled for wide release on Friday, October 26 during the lead-in weekend to the holiday box office season.

- The extended trailer for the film received very positive reactions online.
- A high-profile film with a unique feel to it has the potential to go over well in a year full of sequels.
- Being based on a novel typically helps.

- The unique feel can easily turn into something too high concept and/or esoteric for mainstream audiences.
- Opening after several consecutive weekends of higher profile films and one week before the holiday box office season begins could strongly diminish demand.
- Will high interest levels among the online film community transfer over to more mainstream moviegoers in this case?
- A high-profile filmmaker would usually go a long way toward selling this kind of film, but the Wachowskis were never able to capitalize on their brief popularity following The Matrix.  Speed Racer only made matters worse.
- The combination of Tom Hanks, Hugh Grant, Halle Berry and the Wachowskis could come across as being a bit "too 1990s".

- A collective cast that includes Robert De Niro, Amanda Seyfried, Katherine Heigl, Diane Keaton and Robin Williams.
- Wedding-themed films tend to have at least respectable showings at the box office.
- DeNiro has found success with wedding- and family-themed films in the past with the Meet the Parents franchise.
- A non-wedding season release date aside, the family-driven concept has sleeper status written all over it.

- Not the best release date choice given the proximity to Halloween and what will be a crowded marketplace at the time.
- De Niro, Williams and even Heigl have all seen better days when it comes to their box office drawing power.

- The first film was a very solid performer back in 2006.
- Will have the advantage of 3D ticket premiums this time around.
- The series is based on the popular video game console series which is about to see its 9th title released. It has sold over 7.5 million units across all platforms.
- There was five years between the first and second Resident Evil films.

- It has been over six years since the first film. That long of a wait typically isn't good for a sequel.
- Audiences in the mood for scares are sure to choose Paranormal Activity 4 in its second weekend instead.
- By comparison, the Resident Evil video game series has sold 50 million units across all platforms.
- Sony, who distributed the first film and is very proven when it comes to similar films, won't be distributing this time around.

- Soul Surfer exceeded expectations last year.
- Could be a crowd-pleaser with Curtis Hanson (8 Mile, L.A. Confidential) and Michael Apted (The Chronicles of Narnia: The Voyage of the Dawn Treader, The World Is Not Enough) as co-directors.

- Gerard Butler hasn't proven to be much of a box office draw post-300.
- Will those not interested in surfing have any interest in seeing the film?

- Nickelodeon Movies has a solid history at the box office.
-  Features Victoria Justice, who has a growing following similar to Miley Cyrus or Miranda Cosgrove.  She could draw tweens all on her own.

- In trying to appeal to both teens and children, the film may ultimately turn off both teens and parents.
- Many teens in the mood for a Halloween film will no doubt want to see Paranormal Activity 4 instead.
- Many families will have already have spent money on Frankenweenie and/or Hotel Transylvania.  Those who haven't will still have those options to choose from instead.

Notable changes on our forecast this week include The Words and Pitch Perfect.