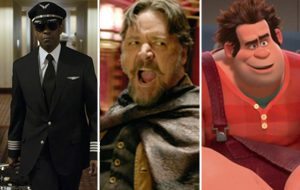 Three new films have joined our Long Range Forecast this week as the kick-off to our long-term predictions for the holiday box office season.  Flight, The Man With the Iron Fists and Wreck-It Ralph are currently scheduled for wide release on Friday, November 2.

The first weekend of November has increasingly become a target for studios to debut films that open big and play well for the remainder of the year.  In fact, the three all-time best openers on this weekend happen to be animated flicks: 2004's The Incredibles ($70.5 million), 2008's Madagascar: Escape 2 Africa ($63.1 million) and 2002's Monsters, Inc. ($62.6 million).

- Denzel Washington.  In a day and age where star power is less meaningful than yore, Denzel continues to buck the trend and is coming off a $40 million-opener in Safe House earlier this year.
- This marks Denzel's fourth high-profile film to kick off November.  The previous three include American Gangster, The Bone Collector and The Siege.  The latter two sold $26.4 million and $23.8 million, respectively, in tickets adjusted for today's ticket prices.
- Robert Zemeckis' fans have been waiting for his return to live-action films.  His last in the genre was 2000's Cast Away.
- Very early Oscar buzz could boost the film's legs through December, although with Denzel's history, its not entirely necessary.

- Zemeckis has been away directing motion capture CGI flicks for nearly a decade.  Will his fans still turn out?
- Opening against Denzel's American Gangster co-star Russell Crowe in another flick could chip away at the audience.  Then again, Crowe isn't exactly a guaranteed draw.
- With Skyfall dropping one week later, how much of Denzel's audience crosses over with James Bond's?

- Having Eli Roth on board as a writer and producer should help the film appeal to the grindhouse niche market.
- Ninja Assassin pulled decent numbers in November three years ago.

- Likely to be very front-loaded given its fanboy-heavy niche audience.
- Will have to contend with opening against a Denzel Washington pic.
- As mentioned above, Russell Crowe's box office draw isn't as strong as it used to be.
- Audiences looking for action are likely to skip this in favor in Skyfall which opens one week later.

- Family-driven animated films tend to do quite well in November.  Disney's first Pixar-less CGI effort, Chicken Little, opened to $40.1 million on the same weekend in 2005.
- Much like Toy Story offered a cinematic gateway into the world of playtime for kids in 1995, Ralph could potentially do the same for today's video game-raised generation.
- Strong early buzz out of CinemaCon.
- After several years filled with animated sequels, this being an original concept could help attract more adult viewers.

- Rise of the Guardians releasing three weeks later could cut into the legs similar to how Tangled over-shadowed Megamind in 2010.
- Disney's second effort, Bolt, didn't fare as well in 2008.  Conversely, Tangled became a huge hit in 2010.  The Mouse House is still finding its feet in the genre without Pixar.
- We've seen a glut of animated films release this year which could impact demand upfront.

Notable changes on our forecast this week include Argo, Dredd 3D, End of Watch, Finding Nemo 3D, House at the End of the Street, Resident Evil: Retribution and Trouble with the Curve.  Also, The Big Wedding (originally scheduled for October 26, 2012) has been removed from the forecast due to Lionsgate's announced release change to April 26, 2013.

Tags: Flight, Wreck-It Ralph, The Man With the Iron Fists