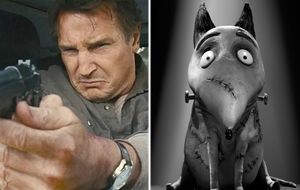 Following last weekend's box office rebound driven by the strong openings of Hotel Transylvania and Looper, as well a great limited debut for Pitch Perfect, the first weekend of October could continue the trend. Liam Neeson returns in Taken 2 while the Disney/Tim Burton Frankenweenie project will also try to get a piece of the pie. In addition, Pitch Perfect will be expanding wide this weekend.

The record gross for the first weekend of October belongs to October 1-3, 2004 when the box office totaled $113.6 million, a figure which should be attainable this weekend.

Fandango reports that The Twilight Saga: Breaking Dawn Part 2 already accounts for half (51%) of the site's sales since tickets were made available on October 1. Taken 2 currently represents 17% of sales, followed by Looper (11%), Pitch Perfect (8%) and Hotel Transylvania (6%).

- The first film became a leggy domestic hit on the back of excellent word of mouth in 2009. It also went on to do very well in the home video market, a good historical indicator of a sequel's box office potential.
- Over 97% of nearly 30,000 Flixster users are anticipating the film, performing slightly ahead of recent films like Total Recall and The Expendables 2.

- Action films dominated a weak August market, and (for varying reasons) the aforementioned Expendables 2 and Total Recall both fell short of expectations. Could they indicate hindered demand for a poorly reviewed sequel such as Taken 2?
- Its been nearly three-and-a-half years since Taken -- no matter how well-liked the film was, was a sequel ever in high demand?
- The start of the MLB playoffs this weekend, as well as the solid word of mouth for Looper, could have a minor impact with the male-skewing audience.

- Tim Burton and Disney paired for huge success over two years ago with Alice In Wonderland.
- The original concept from Burton seems to be more up his fans' alley than this year's Dark Shadows.
- Could prove to be back-loaded due to the Halloween-friendly theme being more maximized toward the end of the month, so a big opening isn't completely necessary.

- Stop-motion animation hasn't found much success among younger audiences (see The Pirates! Band of Misfits). Adding black-and-white to the mix probably only makes the film less appealing to today's youth.
- Tim Burton's style isn't for everyone, and without a big name like Johnny Depp it could be more difficult to match the performance of 2005's Corpse Bride. His older fans could even opt for Taken 2 this weekend.
- Positive online signs could be fan-inflated.
- Similar to the modest performance of ParaNorman two months ago, the subject matter may come off as too dark for families and young children.
- While Coraline debuted to almost $17 million in 2009, it was also the only animated film in the market at the time.
- Last weekend's breakout success, Hotel Transylvania, should hold well this weekend and cut further into Frankenweenie's potential family audience.

Check out our predictions for Taken 2, Frankenweenie and the rest of the top 10 in the table below.