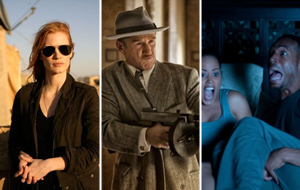 - Moving the wide release away from the crowded adult market in late December gives this a chance to thrive in January, releasing just as Oscar nominations are announced. Black Hawk Down successfully executed a similar strategy in early 2002.
- After the success of Argo, audiences may be more willing to give a film like this a chance, especially if reviews are strong.
- Likely to be more mainstream than The Hurt Locker was.

- War films, especially on modern day subjects, can be hit and miss. See Green Zone and The Kingdom.
- Will be fighting against Gangster Squad over a similar audience during opening weekend.

- The all-star cast gives the film some necessary pedigree during what is typically one of the slowest months of the year.
- Could tap into the same audience that turned American Gangster into a massive $266.5 million worldwide hit.
- Moviegoers have been excited about the trailer, at least on the internet.

- The delay to January could cause it to be overshadowed by any holdover holiday hits and/or Oscar contenders.
- Sean Penn's performance has already been labeled as too over-the-top.
- Without the aid of awards buzz, is likely to be more front-loaded towards opening weekend than Zero Dark Thirty will be.

- The declining performance of the Paranormal Activity series a few months ago could indicate some potential for audiences being ready to give a spoof of the genre a chance.
- Marlon Wayans has previous success with the Scary Movie franchise.
- In the semi-recent past, spoofs such as Epic Movie and Meet the Spartans have performed well in January.

- Spoofs tend to flop far more often than they succeed.
- Making fun of The Devil Inside already feels dated. Most people have already forgotten about that disaster.
- Is surrounded on the release schedule by two horror films: Texas Chainsaw 3D the week before and Mama the week after.
- Audiences in the mood for a comedy may wait a couple weeks for Movie 43 instead.