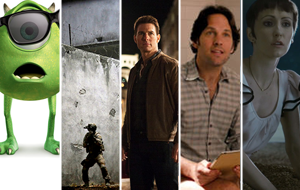 Our Long Range Forecast is busy this week as we add five new wide releases scheduled to hit theaters the last week before Christmas. Monsters, Inc. 3D and Zero Dark Thirty will debut on Wednesday, December 19. Meanwhile, Jack Reacher, This Is 40 and Cirque Du Soleil: Worlds Away will launch on Friday, December 21.

- The relative lack of family options this December, outside of The Hobbit.

- The diminishing results of Disney's 3D re-issues, especially in the recent case of Finding Nemo 3D.

- After the success of Argo, audiences may be more willing to give a film like this a chance, especially if reviews are strong.
- Likely to be more mainstream and higher-profile than The Hurt Locker was.

- There will be plenty of competition for adult audiences this Christmas season.
- It is possible that the film won't go very wide initially.

- Tom Cruise coming off of the success of Mission: Impossible - Ghost Protocol last December.
- Having a built-in audience from the novels, though just how big is that audience?
- The PG-13 rating could prove to be an advantage in comparison to its competitors, especially at Christmas time.

- Tom Cruise coming off the poor performance of Rock of Ages this summer.
- More and more, star power isn't what it used to be. Audiences who liked Cruise in Ghost Protocol, won't automatically watch him in this.

- Could represent a return to form for Judd Apatow critically.
- Christmas is usually a good time to release comedies, especially when it comes to holding power.

- There will be plenty of competition for adult audiences this Christmas season, including direct competition from The Guilt Trip.
- Leslie Mann is unproven as a lead at the box office, while Paul Rudd is hit and miss.

- The stage performance has a strong brand name and fan following.

- The size of that fan base on a mainstream theatrical level hasn't been fully tested in nearly a decade.

Notable changes on the forecast this week include Wreck-It Ralph, Flight, The Man With the Iron Fists and Skyfall.