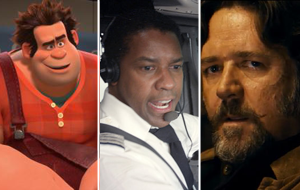 The holiday box office season officially kicks off in the aftermath of Hurricane Sandy, although it will hardly be business as usual for many on the east coast. The result could be a slightly softer November kick-off than otherwise may have occurred.

The highly-buzzed Wreck-It Ralph is set to launch on Friday alongside the Denzel Washington-led Flight and the Russell Crowe starrer, The Man With the Iron Fists. Ironically enough, five years ago this weekend saw the launch of American Gangster (starring both Washington and Crowe) up against another big animated flick (Bee Movie).

While numbers weren't available for any other films, Fandango reports that November 16th's The Twilight Saga: Breaking Dawn - Part 2 currently accounts for 40 percent of their sales.

- The bad guy-gone-good theme succeeded in a big way for 2010's Despicable Me. Ralph seems to be taking a page from that film's book by emphasizing the "cuter" elements of the film - namely the film's little leading lady, Penelope von Schweetz.
- The nostalgic aspects of the film seem to combine well with the more modern take on animated movies that kids want to see. The result could be very potent appeal to audiences of all ages.
- Buzz on Ralph has been increasingly positive for most of the year and critics seem to be enjoying the film (good news for the adult appeal).
- Opening November isn't a foreign concept for the animation genre. Dating back to 2007, films like Bee Movie ($38 million), Madagascar 2 ($63.1 million) and Megamind ($46 million) have kicked off the holiday box office season. Though it opened in December, the video game-themed Tron: Legacy could also be a fair comparison with its $44 million opening in 2010.
- Flixster activity has been comparable to Hotel Transylvania, though considerably behind that of Brave and Madagascar 3.

- The glut of animation films released this year could lessen upfront demand (but shouldn't affect its long-term prospects).
- Nostalgic selling points do not always equate to blockbuster success, even with hits in their own right such as Tron: Legacy.

- Denzel Washington is one of the few stars left who commands a box office draw with almost every film, averaging a $23 million opening weekend since 2000.
- The combination of Washington with Robert Zemeckis's return to live action filmmaking should attract adult viewers, especially with solid reviews thus far.

- In the aftermath of Hurricane Sandy and with a crucial election coming up next week, will audiences be in the mood for a heavier film?
- Flixster activity has been comparable to that of Argo, which debuted well but whose success was found more in the legs. Something similar could apply for Flight.

- Boasting a recognizable face like Russell Crowe and a producing credit from Quentin Tarantino at least helps give the film some crucial credibility. This could help it approach Ninja Assassin's $13.3 million opening in 2009.

- Crowe is far from a consistent box office draw, and this kind of film also plays to the niche audience that sent The Warrior's Way to a $3 million opening in 2010.

Check out our predictions for these films and the rest of the weekend's top 10 in the table below.

Tags: Wreck-It Ralph, Flight, The Man With the Iron Fists