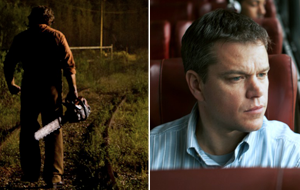 The holiday season officially comes to an end, although the box office should exhibit one last surge of strength off the heels of New Year's as we officially kick off 2013 this weekend with two new wide releases.

With the NFL playoffs in force, many films could be slightly impacted over the weekend.

- The brand name recognition could propel horror fans to turn out.
- The lack of horror films since October may increase demand for this.
- Twitter activity has been generally strong for the past few weeks.

- The weekend after the holidays is mostly known for disappointing/low openings.
- Similarly, for anyone still in the holiday mindset, a slasher/horror flick won't be at the top of their "must see" list.
- The Texas Chainsaw name is hit and miss, last indicated by 2006's modest $18.5 million debut for The Texas Chainsaw Massacre: The Beginning.

- Matt Damon is a well-liked star with enough a following of his own to generate interest.
- Crowd-pleasers can find success at any time of the year.

- Will pitching the film as "from the director of Good Will Hunting" have any relevance 15 years after that hit movie released?
- The low theater count will work against any chance of a breakout opening.
- Adults are still occupied by holiday releases like Django Unchained and Les Miserables.
- Again, the first weekend in January after the holidays isn't known for producing breakouts.

Check out our predictions for the entire top 10 in the table below.