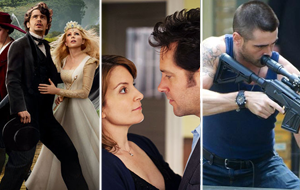 Our Long Range Forecast this week has been updated with three new wide releases scheduled to open on Friday, March 8: Admission, Dead Man Down and Oz: The Great and Powerful.

Oz: The Great and Powerful

- Disney is closely following the template the studio used to achieve great box office success with Alice in Wonderland back in March 2010.
- With a PG rating and so little for family audiences in January and February, it should attract family audiences in big numbers.
- With Sam Raimi as director and James Franco and Mila Kunis as leads, the film will also have a good chance of appealing beyond family audiences.
- In recent years March has become a stronger time of year to release event films.

- While Alice in Wonderland generated blockbuster business at the box office, it hasn't been remembered all that fondly afterwards. That could brush off on Oz.
- By aiming for a younger and hipper feel, the film could turn off older fans of the Oz novels and 1939 film.

- Tina Fey hasn't been in many films, but Baby Mama and Date Night both had very solid box office performances.
- The combination of Tina Fey and Paul Rudd could help the film appeal to date night audiences.
- The film could have a good chance of holding up well given the past box office history of both Fey and Rudd.

- Opening against Oz: The Great and Powerful will be no easy task.
- As a Focus release, likely won't receive an ultra-wide opening weekend location count.

- The re-teaming of Noomi Rapace and director Niels Arden Oplev could draw in fans of the original Girl With the Dragon Tattoo series.

- Colin Farrell has a hit and miss history at the box office.
- Genre films with less mainstream appeal are typically tough sells; Killing Them Softly being a very recent example.

Notable changes on our forecast this week include Broken City, Mama, The Last Stand, Hansel and Gretel: Witch Hunters, Movie 43 and Parker.

Tags: Oz: The Great and Powerful, Dead Man Down, Admission