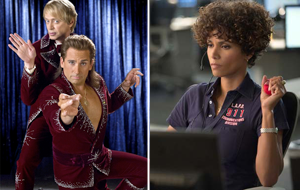 Two new films have joined our Long Range Forecast this weekend: The Call and The Incredible Burt Wonderstone. Both are currently scheduled to open on Friday, March 15.

PROS:
- Sony has a very strong history marketing thrillers.
- Could prove to be good counter-programming to Burt Wonderstone, especially on opening weekend.

CONS:
- Halle Berry has largely been out of the spotlight for a number of years now.
- The film's trailer showing too many plot points could hurt.
- What will the rating be? Prospects could be hurt in this case by an R rating, but on the other hand could be helped out if the rating is PG-13.

PROS:
- The teaming together of Steve Carell and Jim Carrey.
- Opening weekend prospects are brighter with Admission now opening the week after it hits instead of the week before, but holding power could be hurt in turn.

CONS:
- Is surrounded by higher profile March releases, as it opens after Oz: The Great and Powerful and before The Croods and G.I. Joe: Retaliation.
- Carrey isn't the draw he used to be, while Carell saw his drawing power slow during 2012.
- Based on early marketing, could prove to be more of a niche comedy than a broad reaching one.

Notable changes on our forecast this week include Hansel and Gretel: Witch Hunters, Movie 43, Parker and Beautiful Creatures. Also, Admission has been temporarily removed from our forecast due to its release shift.