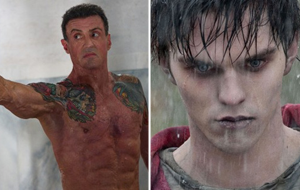 Opening this weekend are Bullet to the Head, Warm Bodies and Stand Up Guys. Historically, Super Bowl weekend isn't known for major breakouts while male-driven films in particular will see substantial declines from Saturday to Sunday.

Bullet to the Head

- Sylvester Stallone has mounted a successful career comeback over the last few years.

- Sly's most recent hits, the Expendables movies, succeeded on the merits of not just his name but an ensemble list of action stars.
- Opening on Super Bowl weekend will result in a huge Sunday drop with the target male audience staying at home for the game.

- Early buzz for the film has been positive with advance screenings helping to spread word about the film.
- Online trailer reactions have been enthusiastic.
- The teen and young adult audience may be looking for something up their alley before Super Bowl Sunday.

- Does the film have enough broad appeal to reach past teens and young adults beyond opening day?

- Walken, Arkin and Pacino give this small profile release some much needed visibility.

- Opening in limited release with a very subdued (almost non-existent) marketing campaign reduces any chance for a breakout.

Tags: Stand Up Guys, Bullet to the Head, Warm Bodies