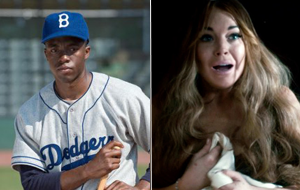 Scheduled for wide release on Friday, April 12, 42 and Scary Movie 5 have been added to our Long Range Forecast this week.

- The inspiring story of Jackie Robinson hasn't been given the high profile big screen treatment in a long time.
- Harrison Ford gives the film some needed star value.
- Adult crowds may be looking for this kind of smaller drama after several weeks of comedy- and action-related fare.

- Baseball-themed movies are more "miss" than "hit" at the box office, historically speaking.
- Will likely rely on strong reviews to carry it.
- Will Ford's presence be enough to bring in non-baseball fans?

- Will be the first straight-up comedy to release since early March.
- The franchise name will lure in some younger crowds, especially if it's rated PG-13.

- The similarly-themed A Haunted House tanked in January.
- The Scary Movie franchise has been dormant for seven years. Will audiences still care?

Notable changes on our forecast this week include Snitch, Dark Skies, The Last Exorcism Part II, and Oz: The Great and Powerful.