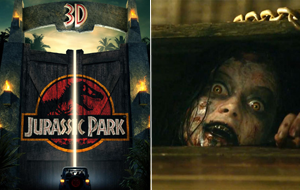 As we enter the final month before summer on our Long Range Forecast, Jurassic Park 3D and the Evil Dead remake have been added to our early predictions. Both films are scheduled to open on Friday, April 5.

- Unlike a number of previous 3D re-releases, Jurassic Park is the type of film audiences may genuinely want to re-watch in 3D.
- The recent announcement of Jurassic Park 4 has helped bring the franchise back into the spotlight.
- Could get an added boost from teenage moviegoers who can't get into Evil Dead.

- Last year at this time, Titanic 3D was in a similar situation, but ultimately had a modest box office performance domestically.
- Audiences are clearly growing tired of 3D re-issues, though the recent removals of Independence Day, Attack of the Clones and Revenge of the Sith from the schedule does give moviegoers less re-issue options to choose from over the long term.

- The redband trailer for the film has gone over well and has helped create strong buzz, at least online.
- Initial horror reboots tend to perform well at the box office. It is typically their sequels that suffer.
- Has a chance of being a well received film in its genre.

- While they have grown far more popular over time, the original Evil Dead films did very little at the box office.
- Given the likelyhood of being a "harder" R-rated film, it could be tougher than usual for teens to be able to see it.

Notable changes on our forecast this week include A Good Day to Die Hard, Safe Haven, Beautiful Creatures, Escape from Planet Earth, Snitch, The Incredible Burt Wonderstone, and Olympus Has Fallen.