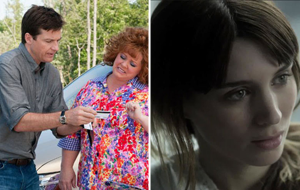 - The casting of Melissa McCarthy and Jason Bateman should be very appealing given the former's increasing popularity since Bridesmaids and the latter's own fan base.
- Aside from the bombing of Movie 43, audiences haven't had an appealing R-rated comedy in awhile.
- Director Seth Gordon is on a roll after Horrible Bosses and Four Christmases became box office successes in 2011 and 2008, respectively.
- Social media tracking has been strong, and the film currently leads Fandango's Top 5 sellers.

- With certain exceptions, comedies tend to be more about legs than a huge opening weekend.
- Bateman is not a consistent box office draw (see The Change-Up).

- Could be overshadowed by Identity Thief and the recent glut of thrillers in the market.
- The film is nowhere to be seen in Fandango's best five sellers as of Wednesday.
- Channing Tatum hasn't been featured prominently in much of the marketing.

Check out our predictions for these films and the remainder of the top 10 in the table below.