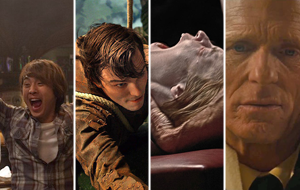 Four films open this weekend as March kicks off and tries to recover from a slow February. Jack the Giant Slayer is considered the favorite to win the weekend, but 21 and Over may have some surprise potential. The Last Exorcism Part II and Phantom also debut.

Please note that while we have Phantom listed in our table below, we see that film debuting outside of the top 12.

- Bryan Singer's name has been attached to a number of high profile films in the past such as the X-Men films, Superman Returns, and his last directorial effort, Valkyrie.
- The ensemble cast provides some recognizable names and faces for the general audience.
- The lack of family movies in the market could draw that crowd out to theaters.
- The well-known fairy tale gives it a sort of brand name.

- Singer's name is more well-known among genre fans than general audiences.
- Last year's John Carter proved that families won't go for just anything, and many of them may be waiting for next week's Oz: The Great and Powerful.
- Social media activity has been fairly modest, though it has picked up steam over the last few days. Flixster activity is extremely weak.

- The older teen/young adult audience may be looking for a new comedy with Identity Thief having been out for awhile now.
- Similarly-themed Project X performed quite well during the same weekend last year.

- With no star names and an R-rating, the upfront audience could be limited.

- Horror films have a strong track record in recent years.

- The first film isn't very well-remembered, and horror sequels don't have as strong of a track record.

- The combined power of recognizable stars can often be as powerful as one A-list stars.
- High concept premise that will be easy to digest for adults looking for familiar entertainment.

- The film's marketing campaign has been almost non-existent.
- Ed Harris and David Duchovny aren't exactly star names today, nor were they consistent draws during their respective career peaks.
- The low theater count.

Tags: 21 and Over, Jack the Giant Slayer, The Last Exorcism Part II, Phantom