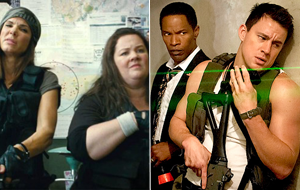 As the closing films for June before Fourth of July weekend, The Heat and White House Down have been added to our Long Range Forecast this week.

- Melissa McCarthy is at the top of her game right now after breaking out in 2011's Bridesmaids while also helping to lead this year's Identity Thief to great box office success.
- Sandra Bullock similarly has a great track record in recent years with The Proposal and The Blind Side (for which she won an Oscar).
- Women are a demographic largely ignored at the box office, and this will be the first time a movie caters to them this summer.
- The hard-R comedic nature of the film should prove to draw male audiences as well.
- Buzz out of CinemaCon was very healthy.

- This will be the fourth of six major comedies to open in summer (after The Hangover Part III, The Internship, and This is the End).
- Opening against a Channing Tatum movie could limit the opening weekend demand among women.

- Channing Tatum has proven himself to be a draw with last year's The Vow, 21 Jump Street, and Magic Mike.
- Jamie Foxx is fresh off the big success of Django Unchained.
- Director Roland Emmerich has had success with past summer releases like Independence Day and The Day After Tomorrow.

- Competition for action movies will be heavy in late June after Man of Steel and World War Z have opened, and before The Lone Ranger.
- Opening against a female-centric comedy could limit the opening weekend potential the film gains through women with Tatum.
- Emmerich's last film, 2012, opened well but was poorly received by audiences. Will they remember and/or care?
- Did this year's Olympus Has Fallen steal too much of its buzz with a similar plot?

Notable changes on our forecast this week include The Great Gatsby, Peeples, Star Trek Into Darkness, Fast & Furious 6, and The Hangover Part III.

Please note that our Star Trek Into Darkness figures below account for a supposed wide release on Thursday, May 16. We are waiting for confirmation from Paramount regarding that date (as opposed to the original Friday, May 17 release).

Tags: White House Down, The Heat