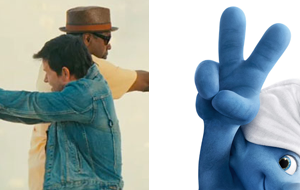 Our Long Range Forecast has been updated this weekend to include two late summer openers: July 31's The Smurfs 2 and August 2's 2 Guns.

- The combined star power of Denzel Washington and Mark Wahlberg and their recent successes with Safe House and Contraband, respectively.
- Audiences looking for more "down to earth" action will have their first option since June 28's White House Down with 2 Guns.
- Interest from men and women could be strong on both fronts thanks to the appeal of the film's stars.

- Should The Wolverine turn out to have positive word of mouth, its second weekend could soften upfront demand for this.

- There may be a sizeable amount of audience overlap among fans of Washington and fans of Wahlberg.

- Healthy box office results in May, June and July could lead to a weak month of August.

- The built-in recognition and appeal of its brand name.
- The first film did surprisingly well in 2011 with over $142 million at the domestic box office.
- Is currently the last major kid-friendly film on the summer release slate.

- Could DreamWorks' Turbo eat into the potential audience opening two weeks before?
- By this point in the summer, families may have had their fill of animated movies (and especially animated sequels).
- The first movie provided a novelty in the franchise's first foray into CG feature film animation. That novelty may be diminished this time.

Notable changes on our forecast this week include Man of Steel (up), The Lone Ranger (up), This Is The End (down on the opening weekend, up on the cume).

This Is The End: $23 million opening weekend*/$95 million cume