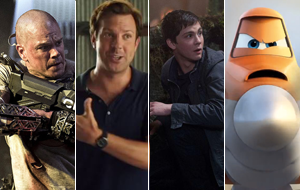 Four new films have joined our Long Range Forecast: Elysium, We're the Millers, Percy Jackson: Sea of Monsters, and Planes are all scheduled to open on Friday, August 9.

- Matt Damon's post-Bourne career has been healthy thanks to The Adjustment Bureau and We Bought A Zoo. Jodie Foster's presence is also a strength.
- The original sci-fi concept offers something unique for audiences.
- Neill Blomkamp found a great deal of success with his debut film, 2009's District 9. The goodwill from that surprise hit will help boost Elysium.

- After a summer jam-packed with sci-fi movies, demand for another at the tail end of summer could be limited.
- On a busy weekend, being the first choice for general audiences will require a strong marketing campaign.
- 2 Guns, which hits theaters a week before Elysium, could eat into the potential adult moviegoing crowd.

- The pairing of Jason Sudeikis and Jennifer Aniston. Sudeikis and Aniston helped lead Horrible Bosses to strong numbers in 2011.
- This will be the first straight-up comedy targeting adults since the release of The Heat.

- Aniston has had her share of duds, and Sudeikis can't be labeled a reliable draw yet.
- The concept could remind audiences too much of Adam Sandler's Just Go With It (also starring Aniston).

- The first film was a modest box office success in 2010.
- Facebook activity has increased significantly with the release of new marketing materials. The fan base is clearly expanding.

- Having been more than three years ago, is the popularity of the series strong enough to withstand that long of a gap between releases?
- The crowded release slate for opening weekend.

- The Cars franchise is still very popular with kids despite the second film creating backlash among older crowds.
- Could show strong staying power until Cloudy with a Chance of Meatballs 2 opens in September.

- The backlash against the Cars brand from older crowds.
- Opening after the glut of animated films in July (Despicable Me 2, Turbo, and The Smurfs 2).

Notable changes on our forecast this week include Monsters University (down), The Conjuring (up).