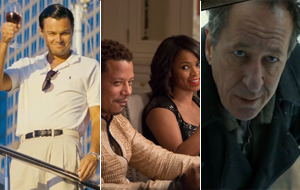 Currently slated to open on Friday, November 15 are Martin Scorsese's The Wolf of Wall Street (starring Leonardo DiCaprio), The Best Man Holiday, and The Book Thief.

The Wolf of Wall Street

- The fifth pairing of Scorsese and DiCaprio should have wide appeal after their immense success over the past decade.
- Leo's success from Django Unchained and The Great Gatsby is likely to carry over here.
- In the wake of Thor: The Dark World, and ahead of The Hunger Games: Catching Fire, older audiences will likely gravitate toward a more adult-oriented picture.
- The ensemble cast will widen the potential appeal of the film thanks to Matthew McConaughey and Jonah Hill.
- Should awards buzz follow, look for a healthy run after an already solid opening weekend.

- Will audiences be interested in seeing a 1990s-set movie about a crooked Wall Street banker?
- Sandwiched between Thor and Catching Fire, drawing young adults will be more difficult.
- The apparent "sleaze" of Leo's leading character could be off-putting for general audience consumption.

- 1999's The Best Man proved a modest hit among urban audiences.
- The holiday setting of the comedy/drama should tie in well to its release date.
- Since the original film, Terrence Howard and Regina Hall (and Taye Diggs to a lesser extent) have gone on to become fairly prominent names.
- The lack of any films appealing to women prior to release should help.

- Will audiences still care to see these characters again fourteen years later?
- Aside from Howard and Hall, the film boasts little in the way of star power.

- Star Geoffrey Rush has become quite popular in America thanks to his turns in the Pirates of the Caribbean franchise, as well as The King's Speech.
- Director Brian Percival is making the transition from television, where directed several episodes of the highly successful Downton Abbey series.
- Wartime dramas released during this time of year are capable of finding an audience if awards buzz follows.

- Aside from Rush, the film boasts no recognizable cast members for general audiences.
- Is likely to be overshadowed by the release of a new Martin Scorsese picture on the same weekend.
- Will likely end up with a semi-limited or limited release on opening weekend.

Notable changes on our forecast this week Gravity (up) and Runner Runner (down).

Tags: The Wolf of Wall Street, The Best Man Holiday, The Book Thief