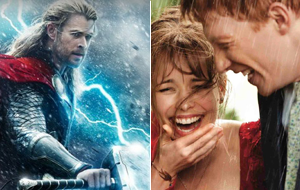 Our early glimpse at the holiday box office season continues this week with our first forecast for the anticipated Marvel sequel, Thor: The Dark World, and director Richard Curtis' About Time.

- 2011's Thor impressed with its $181 million domestic haul.
- As another post-Avengers standalone sequel, this could experience a noticeable bump in audience from the first Thor.
- The sequel's trailers have frequently drawn positive remarks on Twitter.
- The popularity of Chris Hemsworth and Tom Hiddleston has only grown over the last two years.

- Since the first Thor already played in 3D, the large 31 percent bump in gross that Iron Man 3 enjoyed from its predecessor isn't as likely to occur here.
- This sequel will face direct competition from the hugely anticipated The Hunger Games: Catching Fire in its third weekend.
- Rumors around the sequel's production have been mixed, largely because of directorial rumors and last-minute reshoots.

- Director Richard Curtis has found consistent success through films like Love Actually, Notting Hill, and Four Weddings and a Funeral.
- A romantic comedy should serve as decent counter-programming to the weekend's more high profile new release, particularly with Rachel McAdams' past genre success.
- About Time is more likely to enjoy long legs than a sizable opening.

- British romantic comedies aren't easy sells--especially considering the more obscure sci-fi nature of this film.
- Outside of McAdams and Bill Nighy, the cast carries few recognizable names or faces to American crowds.
- Given the considerable female appeal of Thor's Hemsworth, date crowds may still avoid this one initially.