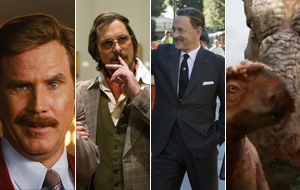 December 20's Anchorman 2: The Legend Continues and Walking with Dinosaurs have been added to our Long Range Forecast, as well as the wide expansions of American Hustle (December 18) and Saving Mr. Banks (December 20).

- Since its respectable $85.3 million domestic gross in 2004, the original film has come to be regarded as a new comedy classic.
- Will Ferrell has significantly expanded his audience and drawing power since the first film, as has the rest of the ensemble cast.
- Ferrell and director Adam McKay have a strong history together since the original, including Talladega Nights and The Other Guys.
- The Dodge Durango marketing tie-in has become a viral sensation.
- With very few comedies opening during the holiday season, this should attract audiences of varying ages looking for laughs.
- Social network activity has been consistently strong.

- Franchises that have been dormant for nearly a decade don't always explode at the box office upon their return.
- The holiday opening places it in the middle of a very crowded marketplace.
- With the original's highly held status among movie fans, will a sequel be able to live up to expectations?

- The attention-grabbing star power of Christian Bale, Jennifer Lawrence, Amy Adams, Bradley Cooper, Jeremy Renner, and director David O'Russell.
- O'Russell is fresh off the success of Silver Linings Playbook and The Fighter, both commercial and critical hits.
- Oscar buzz and word of mouth could propel this through winter.

- The subject matter may not be as endearing to large audiences as the more emotionally-driven Silver Linings and The Fighter.
- Period films aren't always consistent box office hits.
- The very competitive marketplace.

- Tom Hanks portraying Walt Disney could be the perfect combination right after his box office comeback with Captain Phillips.
- The Disney (distribution) brand name and its potential power during the holiday season.
- Early buzz indicates a crowd-pleaser.

- A film based on the inner workings of the movie industry and how Mary Poppins came to be could be more for adults than younger audiences.
- For the uninitiated, the title gives no indication of the Disney or Poppins connections.
- The very competitive marketplace.

- Outside of The Hobbit: The Desolation of Smaug, there aren't any other visually-driven films targeting children/family audiences in late December.
- The original documentary-style series which this is based on did fairly well after its television debut in 1999/2000.

- With so many other options in the market, will audiences be interested in seeing a film adaptation of a decade-old series?

Notable changes on our forecast this week include Thor: The Dark World (up), Last Vegas (down), Free Birds (down), Ender's Game (down)