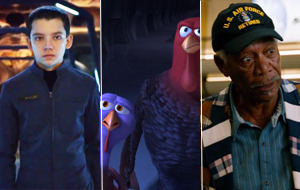 November kicks off with three new wide releases this weekend, in addition to the expansion of 12 Years a Slave and limited opening of About Time.

- The marketplace hasn't had very many films targeting young audiences and families since September.
- The ensemble cast could appeal well to both adults and kids.
- Flixster activity is particularly strong.
- The book's fan base.

- Twitter and Facebook activity have been fairly modest.
- Neither Harrison Ford, Ben Kingsley, or Viola Davis have proven to be box office draws on their own in recent years.
- The over-saturation of sci-fi movies this year.

- Families may be looking for something new since September's Cloudy with a Chance of Meatballs 2 opened.
- The recognizable voice cast, including Cars' Owen Wilson, could appeal to adults as well as kids.
- The timing could help the movie to capitalize on its Thanksgiving theme.

- With no major brand association, such as Disney, Pixar, or DreamWorks, a big upfront turnout isn't likely.
- This may be competing with Ender's Game for certain younger audiences and families.
- Online activity has been modest.

- The all-star cast should appeal strongly to adult audiences.
- Reviews, while not entirely positive, concede that this may be a crowd-pleaser.

- Targeting a similar audience, Red 2 failed to generate a lot of interest this past summer.
- Social media activity has been noticeably sluggish.

Check out our forecast for these films and the remainder of the weekend's top 12 in the table below.