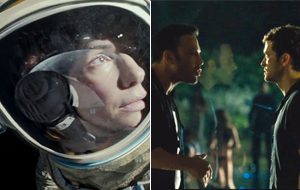 October kicks off with this weekend with Warner Bros.' Gravity and Fox's Runner Runner.

- Critical response has been glowing in the weeks since the film's festival debuts.
- Sandra Bullock has developed a strong ability to draw mainstream audiences over the last few years thanks to The Blind Side, The Proposal, and The Heat. George Clooney brings an added bonus himself with his consistent fan base.
- Director Alfonso Cuarón boasts his own fan following.
- Comparisons to 2001: A Space Odyssey will surely bring out film enthusiasts.
- Twitter and Flixster activity levels are very encouraging.
- Early Oscar buzz is already heating up for the film.

- Will critical and fanboy buzz translate into average moviegoer interest?
- Cuarón has been off the grid for quite some time, last helming 2006's acclaimed--but financially disappointing--Children of Men.
- October hasn't been known for blockbuster runs--could Gravity change that?

- Ben Affleck is in the middle of a career comeback thanks to Argo, The Town, and his recent casting as Batman.
- Justin Timberlake has been all over the media recently as he promotes his new album.
- Moviegoers not interested in Gravity will likely choose this alternate star-pairing flick.

- Reviews haven't been kind.
- Affleck isn't known for playing "the bad guy"--could it be more of a turn-off than a turn-on to audiences?
- Social network activity has been sluggish.

Check out our forecast for these openers and the remainder of the weekend's top 10 in the table below.