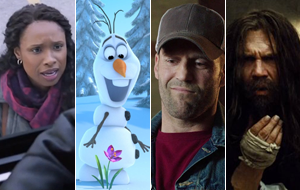 - Disney has a strong history of box office performances from animated titles over Thanksgiving weekend, recently including Tangled and Enchanted.
- Appealing to women of all ages has proven to be a successful strategy for the studio, as well as recent blockbusters.
- Early reviews have been very positive, adding to the film's potential.

- Any potential crossover between the female audience of this and Catching Fire could limit upfront sales compared to Tangled.
- Marketing hasn't highlighted the musical nature of the film, something that could put off young boys from the flick.
- Twitter and Facebook activity are improving, but had slow starts entering the week.

- The breakout success of The Best Man Holiday likely cut off any chance this had of finding a large audience.
- Twitter, Facebook, and Flixster activity have been notably sluggish.

- Jason Statham carries a consistent fan base into most of his films. James Franco adds to the potential middle-America appeal
- The film provides counter-programming to the female-leaning films dominating the market.

- Statham's audience size is limited, as is Franco's box office appeal.
- Online activity has been modest at best.

- The original film isn't well known outside of its niche fan base.
- The limited opening in 583 locations.
- Neither Brolin nor Jackson have shown a consistent ability to deliver strong box office numbers on their own.
- Director Spike Lee is known for polarizing audiences.

Check out our forecast for this 3-day weekend's top 13 in the table below.