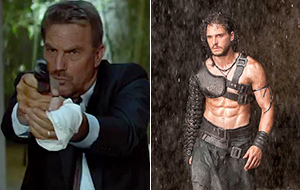 February 21's 3 Days to Kill and Pompeii have been added to our Long Range Forecast.

- Kevin Costner returns in an action-driven role that could appeal to older crowds during this slower time of year.
- Director McG has a few box office hits on his resume.
- The blend of action and comedy could help the film appeal equally to men and women.

- Costner hasn't been a draw, or very present for that matter, in years.
- McG's previous film, This Means War, was met with lukewarm reception in 2012.
- Liam Neeson's Non-Stop opens one week later. Could that hinder interest in this?

- Director Paul W.S. Anderson has found solid box office success in the past with the Resident Evil franchise.
- Epics set during ancient times sometimes find modest success during this time of year, ala 2007's 300 and 2008's 10,000 B.C.
- Star Kit Harrington will be recognizable to fans of HBO's wildly popular Game of Thrones.

- Anderson hasn't found much success outside of the Resident Evil series, his most recent effort being an outright bomb (The Three Musketeers).
- Competition from the previous weekend may hold back the essential younger audiences this film will be targeting.
- Early trailer reactions from the online community haven't been very encouraging.
- Harrington is a new player when it comes to the film-side of the business.

Notable changes on our forecast include Paranormal Activity: The Marked Ones (down).