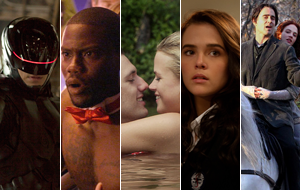 Our Long Range Forecast has been updated this week to include five new wide releases set to debut over the four-day Valentine's Day weekend.

- The built-in audience from the original series.
- The latest trailer has generated some positive response from the online crowd.
- Will get a jump start on the extended weekend with its Wednesday opening.

- The original film was regarded as a date night hit back in 1986.
- Kevin Hart's popularity continues to surge.
- It's going after the same key African-American demos that turned another recent remake--Death at a Funeral--into a solid hit.

- A very crowded slate of new releases.
- Will audiences be interested in a remake?
- Opening close to Valentine's Day could result in front-loading.

- Romantic flicks generally do solid business around Valentine's Day.
- Alex Pettyfer could be a noticeable draw among women after his popular turn in Magic Mike.

- The crowded slate of new releases.
- With no significant box office drawing power, this is likely to be overlooked by most audiences.

- The trailer makes the film look a little too dark and brooding, which means it could lose out on date-night crowds.

- The comedic twist on the vampire genre could prove successful, ala Warm Bodies.
- Online reactions to the trailer have been encouraging.

- The vampire genre has likely passed its peak with the end of the Twilight franchise.
- This flick lacks any star power.

- Director/co-writer Akiva Goldsman has a history of being attached to box office successes.
- The cast, led by veterans Colin Farrell and Russell Crowe, could attract older moviegoers over Valentine's weekend.

- Both Farrell nor Crowe have endured their share of duds at the box office.
- Competition from other romantically themed films could hinder this.

Notable changes on our forecast this week include The Secret Life of Walter Mitty (down), Grudge Match (down), 47 Ronin (down) and Justin Bieber's Believe (down).