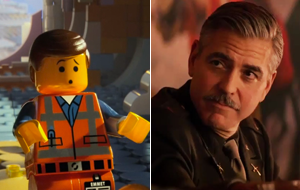 BoxOffice takes a first look at February 2014 with the addition of The LEGO Movie and The Monuments Men to our Long Range Forecast, slated to open February 7.

- The enduring popularity of the LEGO brand, which has extended from toys to video games and numerous direct-to-video/television specials.
- Appeal to older crowds should also be strong for an animated movie.
- Online buzz has been impressive since the first trailers debuted this year, partly driven by the presence of popular characters like Batman.

- February isn't known for delivering many blockbusters, particularly in the animated genre as kids are back in school.
- Opening against The Monuments Men may deter any older crowds without young families.
- Is the brand strong enough to deliver strong numbers on the level of Wreck-It Ralph and Tron: Legacy?

- The large ensemble cast of popular actors, led by George Clooney and Matt Damon.
- The release delay created some free press for the flick, helping to generate awareness early.
- The Ocean's Eleven-meets-Saving Private Ryan vibe could be very attractive for moviegoers during a time of year with few appealing options.

Notable changes on our forecast this week include The Wolf of Wall Street (up), Walking with the Dinosaurs (down), The Secret Life of Walter Mitty (down).