Weekend Forecast: 'The Hobbit: The Desolation of Smaug' & 'Tyler Perry's A Madea Christmas' 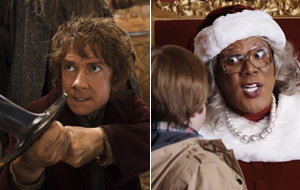 This second frame of December sees the anticipated release of Peter Jackson's The Hobbit: The Desolation of Smaug, as well as Tyler Perry's A Madea Christmas.

- Excitement from fans has perked up since last year's first installment thanks to stronger trailers/marketing.
- General audiences helped send An Unexpected Journey north of $300 million domestically last time around.
- Early reviews indicate a generally well-paced improvement over the previous film.
- Twitter activity is slightly ahead of Journey at this same point in the pre-release cycle.

- An Unexpected Journey was met with lukewarm reactions from some die hard fans and casual moviegoers.
- Although reviews are trending in the positive direction, average moviegoers may still wait to check out the film until their Christmas breaks.
- Flixster activity is down significantly (about 30 percent) from where Journey stood before release.
- The simultaneous debut of A Madea Christmas could chip at away even more at The Hobbit's already modestly-sized female audience.

- Tyler Perry has established a consistent audience and box office reputation over the years.
- Bringing his most popular character, Madea, to the holiday season for the first time should provide a bit of synergy for his audience.
- The previous Madea flick, Madea's Witness Protection, did solid business with its Summer 2012 release.
- Twitter and Flixster activity are leaps and bounds ahead of most Perry films.

- Perry films haven't broken out north of $30 million in several years.
- The Christmas theme could inadvertently result in a more back-loaded run.
- The recent success of The Best Man Holiday may have capitalized on a starved audience too closely to the release of this flick.
- Debuting against The Hobbit: The Desolation of Smaug could prevent a major expansion of Perry's audience.

Check out our forecast for these films and the remainder of the weekend's top ten in the table below.