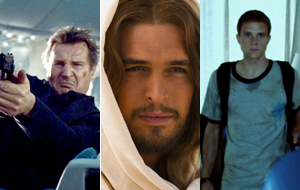 - Liam Neeson has revitalized his box office career in recent years thanks to the Taken franchise, which found great success with its first entry during a winter 2009 release.
- After early January's Jack Ryan: Shadow Recruit, adult crowds won't have much to choose from until this opens.
- Co-star Julianne Moore is a well-respected and appealing actress for older audiences.

- Taken 2's lukewarm audience reception could have some effect here.
- Are audiences getting burned out on Neeson's action flicks?

- The television miniseries (The Bible) which this is edited down from was a huge ratings success in early 2013.
- Some Christian audiences will likely show up out of curiosity and/or not having seen the miniseries.

- Very rarely do religiously themed films find a big audience at the box office in the vein of 2004's The Passion of the Christ.
- Fans of the miniseries could turn away knowing they've already seen a longer version of this film.

- The found-footage sci-fi feel is reminiscent of Chronicle, which beat box office expectations in early 2012 thanks to similar teenage appeal.
- Online trailer reactions have been fairly positive.

- The found-footage sub-genre has lost some of its box office potency recently.
- Fans of Chronicle aren't guaranteed to show up, and if they do, this film will have to generate similarly positive word of mouth on its own.

Notable changes on our forecast this week include That Awkward Moment (up), The LEGO Movie (down).