Long Range Forecast: 'Heaven Is For Real', 'Transcendence', 'A Haunted House 2' and 'Bears' 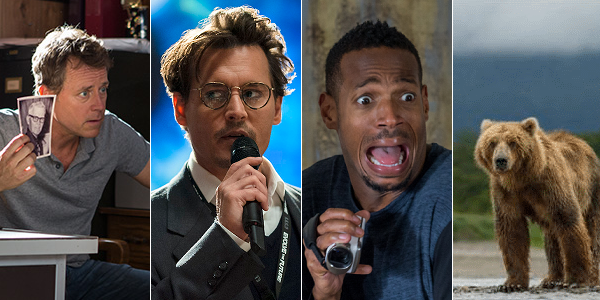 BoxOffice adds four new films to our Long Range Forecast this week: Heaven Is For Real, Transcendence, A Haunted House 2 and Bears. Will they help April post healthy numbers or are they doomed to lack momentum due to the oncoming Summer season?

Heaven Is For Real
(Sony)

- The fact that it's based on a best-selling book helps quite a bit.
- Sony successfully turned Courageous--another film aimed at religious crowds--into a $35 million sleeper hit back in 2011, so they clearly know how to handle this kind of material.

- We're concerned that the one-two punch of Son of God in February and Noah in March will steal away the attention of religious moviegoers and leave little behind for Heaven is for Real.
- Star Greg Kinnear is far from a reliable draw.
- Some families may opt to see Bears instead.

- The first trailer is helping build buzz at a steady pace on Facebook and Twitter.
- Transcendence boasts one of the most impressive ensemble casts of the year.
- We're betting that first-time director Wally Pfister has learned more than a few tricks from Christopher Nolan after serving as cinematographer on many of his films.

- Star Johnny Depp is on a cold streak following Dark Shadows and The Lone Ranger.
- It's possible that males 18-34--a big demo for this one--may just save their money until The Amazing Spider-Man 2 kicks off the summer season a few weeks later.
- The sci-fi genre is general is not very reliable.

- The original's $40 million haul came as something of a surprise. It's clear that Marlan Wayans still has a loyal fanbase.
- Early to mid-April doesn't boast a lot of comedies, so competition in that area will be thin.

- The underwhelming performance of Scary Movie 5 last April is reason for concern. The horror-spoof genre could be running out of steam yet again.
- The film's marketing campaign makes A Haunted House 2 feel way too much like its predecessor. Redundancy isn't always a good thing.

- This one will be an easy choice for families with young children.
- 2012's Chimpanzee turned into a solid $28 million hit. It's possible that the Disneynature brand is growing.

- There are a lot of films aimed at families during the first four months of 2014, which means that Bears could hit a wall.

Check out our predictions for these films as well as others in the table below. Notable changes include Non-Stop (up), Son of God (up) and 300: Rise of an Empire (up).

Tags: Heaven Is For Real, Transcendence, A Haunted House 2, Bears