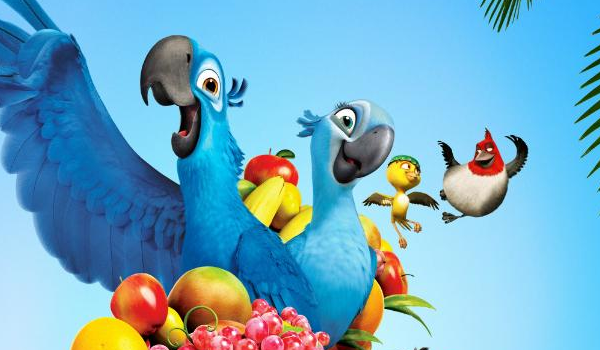 BoxOffice adds four new films to our Long Range Forecast this week: Rio 2, Oculus, Draft Day and St. Vincent. Will they help bolster the month of April in a significant way? Read our analysis below.

- The first Rio film turned into a solid $143 million domestic hit when it opened in April 2011. That success give the sequel a solid base to build upon.
- With the Ice Age franchise slowly losing its drawing power in North America, we think that Rio could pick up some of that momentum.
- The first theatrical trailer finds a perfect balance between humor for children and humor for adults. We're very impressed.

- Animated sequels sometimes end up disappointing at the box office. Two recent examples: Cloudy with a Chance of Meatballs 2 and The Smurfs 2.
- Rio 2 faces the unenviable task of following The LEGO Movie and Mr. Peabody & Sherman. If families burn through a lot of disposable income on those two films, they could wait to watch Rio 2 at home.

- April has turned out to be fertile ground for horror flicks recently. Case in point: the first Insidious film launched in April 2011.
- Horror buffs aren't going to have a lot to chose from in early 2014. They could turn out in droves to satisfy their hunger.

- Launching an original horror franchise is still a difficult task that not every film can pull off. See Devil's Due.
- The market is going to be very crowded, and the strength of Captain America: Winter Soldier could steal away the attention of males 18-34.

- Will likely remind a lot of viewers of Moneyball with it's "one man fighting the system" plot.
- Starring in a sports-themed flick seems like a better fit for Kevin Costner than trying to become an action star again.
- The film was wisely advertised during the Super Bowl--a no-brainer decision that helped the film connect with its core audience: football-loving males.

- Costner's comeback seems to be losing steam already. He didn't help turn Jack Ryan: Shadow Recruit into a hit, and our expectations are low for 3 Days To Kill.
- The power of Captain America: The Winter Soldier could also hurt this.

- Doesn't seem to be receiving a very enthusiastic push from The Weinstein Company.
- A very crowded market could stifle its ability to take off.

Check out our predictions for these films and others in the table below. Notable changes this week include Pompeii (down) and 3 Days To Kill (down).