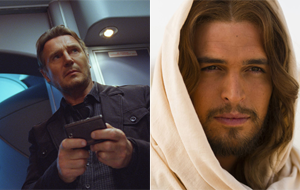 The final day of February will see the release of two new films: Non-Stop and Son of God.

- Various outlets report that pre-sales have been very strong, with over 500,000 tickets sold (as of last week).
- Churches have gotten behind the film in a noticeable way.
- Concentrated efforts have been made to appeal to the Hispanic community.
- The film is shortened from last year's popular miniseries, The Bible.

- Whether or not the film is appealing beyond church audiences is a huge question mark.
- Will audiences see the movie as a separate entity from the miniseries, or an unnecessary retread?

- Liam Neeson's reliability as an action draw at the box office.
- The film's strong Facebook and Flixster activity.
- Enough has time passed since Lone Survivor, including a number of misfires, that action fans may be ready for something new.

- Following the modest word of mouth over Taken 2 and The Grey, might Neeson's goodwill have declined slightly?
- If Son of God does prove to break out, it could hinder Non-Stop to a certain, albeit minimal, extent.

Check out our forecast for the weekend's top 10 in the table below.