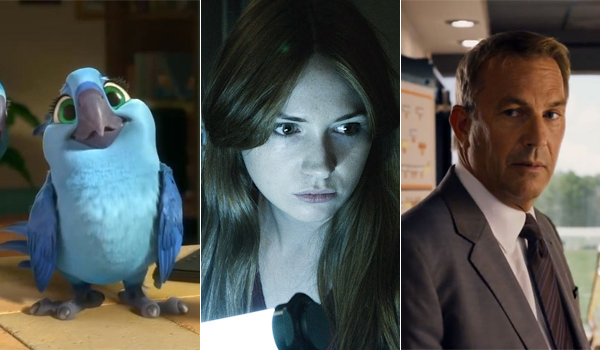 April 11 sees the release of three new films: Rio 2, Draft Day, and Oculus. Meanwhile, Captain America: The Winter Soldier is expected to hold up well in its second frame thanks to very encouraging word of mouth in the wake of its April record debut.

- The first film did great business for a new animated property, earning $144 million domestically.
- Animated films have been performing well. Will the trend continue?
- With The Winter Soldier's audience skewing toward older men, that leaves an opening for Rio 2's female interest.
- Flixster buzz is encouraging.

- Animated sequels to non-blockbuster movies haven't lived to their hype recently. See Cloudy with a Chance of Meatballs 2 and The Smurfs 2.
- Twitter activity is noticeably behind that of The LEGO Movie at the same point.
- Regardless of skewing older male, the Captain America sequel still boasts a lot of drawing power with younger audiences.

- Kevin Costner's quasi-comeback over the past year has increased this film's exposure.
- With the end of March Madness, male audiences could be in the mood for a sports-themed movie.

- 3 Days to Kill and Jack Ryan: Shadow Recruit weren't big hits for Costner.
- Flixster buzz is significantly behind that of 3 Days to Kill.
- The male-leaning audience for this film may be preoccupied with Winter Soldier.

- The horror audience has been starved since January's Devil's Due and Paranormal Activity: The Marked Ones.
- Early reviews indicate this is a winner for horror fans. Could this replicate the April success of 2011's Insidious?
- Flixster activity is noticeably ahead of that of Devil's Due.

- The lack of star names or brand recognition somewhat decreases the potential for a breakout.
- With a fairly packed market right now, how much of an audience will this attract?