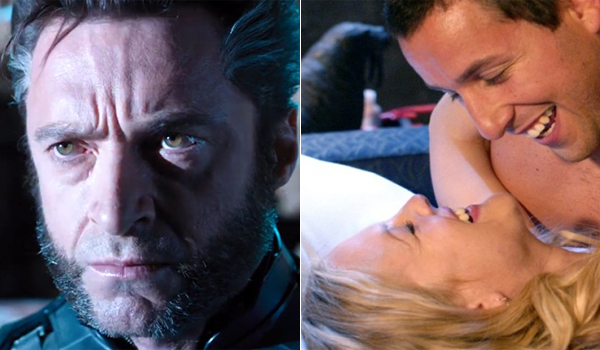 This Memorial Day weekend sees the anticipated release of X-Men: Days of Future Past, as well as Adam Sandler's and Drew Barrymore's latest pairing in Blended.

- The assembling of the original cast and their younger counterparts from First Class, as well as the fresh time travel concept new to the genre on film, are potential "sum greater than the whole of its parts" strategies successfully employed by the likes of Star Trek and The Avengers.
- Online buzz has been exceptionally strong over the past year with a higher Flixster count than any other 2014 release and more Facebook fans than both Captain America: The Winter Soldier and The Amazing Spider-Man 2.
- In addition to the popular Hugh Jackman, Jennifer Lawrence's presence should bolster appeal to women in the wake of her rise to stardom since First Class.
- This sequel returns to a Memorial Day opening, which last delivered a $123 million unadjusted 4-day opening for X-Men: The Last Stand in 2006.
- Bryan Singer returns in the director's chair for the first time since X2, and early reviews indicate he has successfully corrected the franchise's course. Word of mouth should drive this film's legs well into June.

- A string of modest financial successes and varying word of mouth since X2 have left the franchise in a state of limbo, losing its event status with recent prequels and sequels.
- The breakout success of last weekend's Godzilla could mute upfront demand.
- As the third comic book movie to open in less than two months, are audiences burned out right now?
- Twitter activity has noticeably trailed that of both Captain America: The Winter Soldier and The Amazing Spider-Man 2.

- Adam Sandler has a knack for getting his audience to turn out for most his films.
- Sandler and Barrymore have past success from The Wedding Singer and 50 First Dates.
- The family-friendly rating makes this the only comedy parents can take their kids to see over the holiday frame.

- Sandler's box office power has taken in recent years, and buzz for this is similarly lacking as it was for That's My Boy and Jack & Jill.
- The crowded market will likely result in audiences overlooking this Sandler outing.
- Online buzz, unsurprisingly, has been soft.

Check out our complete 4-day weekend forecast in the table below.