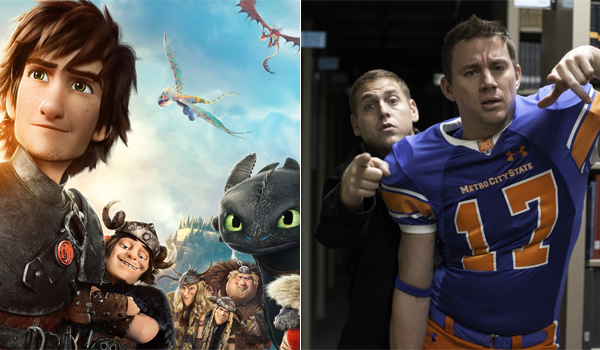 This weekend sees the release of two very different, but anticipated, sequels.

- The first film received excellent word of mouth and a leggy run in its spring launch two years ago.
- Jonah Hill and Channing Tatum in particular have continued to increase their star power since the original movie.
- Flixster and Twitter activity are exceptionally strong ahead of release.
- The film is already "Certified Fresh" on Rotten Tomatoes--a rarity for comedies, sequel or not.

- Facebook and pre-sales activity leave a little bit to be desired.
- Will Neighbors' success hold back upfront demand for this one?
- Will the recent negative press around Hill have any effect? (We doubt it.)

- The first film was widely beloved by both kids and parents, going on to be nominated for an Oscar.
- As the first animated release since April's Rio 2, this could satiate some market demand among families.
- Flixster activity has been mightily impressive, ranking among the most anticipated movies of 2014.
- Early reviews are very strong.

- With few animated releases this summer, Dragon 2 could play out more in legs than is typical for a sequel.
- Animated sequels usually break out when they provide a sense of comedy. Dragon's more dramatic tone could turn it into another Kung Fu Panda 2-type performer.
- Neither Twitter nor Facebook activity are significantly ahead of Rio 2 or The LEGO Movie at the same point.

Tags: How to Train Your Dragon 2, 22 Jump Street, predictions