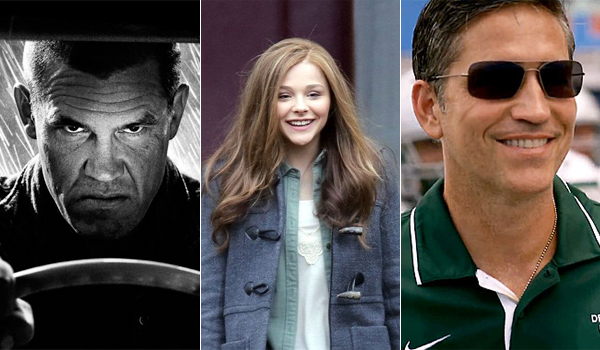 On the penultimate weekend of summer, three new films go into wide release. Will any of them take first place away from strong holdovers Turtles and/or Guardians?

Sin City: A Dame to Kill For

- The original film earned a solid $74 million domestically in 2005.
- Bringing back many of the original's favorite characters, and a few new additions, could spice up interest.
- Flixster and Facebook activity have been quite encouraging.

- Although the success of fellow Frank Miller adaptation 300: Rise of an Empire suggests otherwise, the seven-year wait may prove too long for non-fans.
- Twitter activity is significantly behind that of Hercules, 300: Rise of an Empire, and Kick-Ass 2.
- Will general audiences still find any curiosity in the film's visual appeal?

- The 2009 novel was relatively popular and well-reviewed.
- Star Chloe Grace Moretz has been considered a rising young star for quite some time, and should add to this film's appeal given the target audience.
- Twitter and Facebook activity have been very encouraging.

- The film will inevitably be compared to The Fault in Our Stars given the proximity of their releases this summer.
- Flixster activity has left something to be desired.
- Although no slouch in its own right, book sales weren't near the level of Fault.

When the Game Stands Tall

- Sony is hoping to repeat the modest success of fellow August sports drama, 2006's Invincible.
- As football season begins, the sport's fans could turn out for this audience-friendly story.

- Social media activity has paled in comparison to Heaven is for Real.
- With much star power outside of Jim Caviezel, and scant marketing, this could easily be overlooked by moviegoers.

Tags: If I Stay, When the Game Stands Tall, Sin City: A Dame to Kill For, predictions