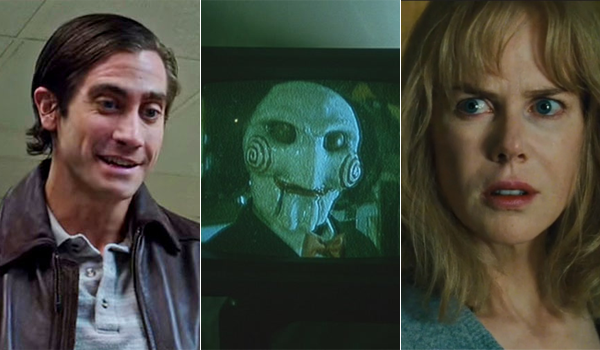 On the final weekend before the holiday movie season officially kicks off, three films aim to capture an audience beginning on Halloween Day.

- Jake Gyllenhaal has headlined a number of well-received thrillers in recent years, which could add some pedigree to this otherwise low-key flick.
- Social media buzz is solid across Twitter, Facebook, and Flixster, drawing comparable activity as John Wick.
- Early critical reviews are very encouraging.

- As the final weekend before two big releases open November next week, many audiences will likely avoid the theaters.
- Gyllenhaal himself isn't exactly an automatic ticket-seller.
- The dark and seedy concept will likely limit the film to cinephiles.

- The re-issue's opening on Halloween itself should play well to fans of the new horror classic.
- The franchise boasts an impressive 18.4 million fans on Facebook.

- In the era of On-Demand, it's unlikely that anyone outside hardcore fans will bother paying to see this in theaters again (especially in the wake of Annabelle and Ouija).
- After the first few films, the franchise became watered down by sequels as franchise fatigue set in. It's probably too early to re-ignite excitement in the series.

Before I Go to Sleep

- Stars Nicole Kidman and Colin Firth bring some needed star names to this under-the-radar thriller.
- Twitter activity is respectable with over 17,000 tweets during the past week.

- Unfortunately, neither Kidman nor Firth are major draws in North America, and the glut of thrillers in the market right now will weigh this down.
- Facebook and Flixster buzz leave much to be desired.

Tags: predictions, Saw, Nightcrawler, Before I Go to Sleep