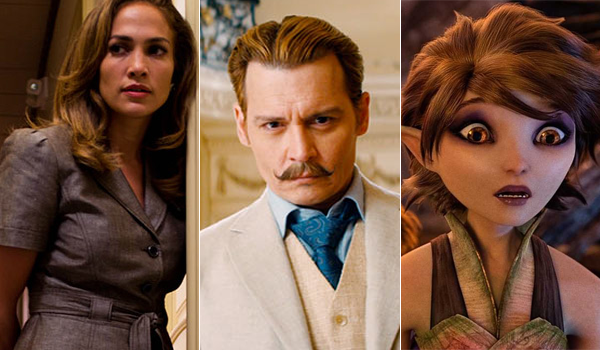 Three new films open on the penultimate Friday of January, although none will stop American Sniper from a second straight weekend victory.

The Boy Next Door

- Twitter and Flixster activity have been roughly on par with that of No Good Deed.
- Jennifer Lopez still carries some pull with Latino audiences, a continually growing audience segment.
- Facebook growth is also very healthy.

- Unfortunately, with such a busy frame last weekend, any new release will have a hard time finding a sizable audience right now.
- Lopez's overall box office drawing power isn't as strong as it was a decade ago.

- The all-star cast could prove to entice adult audiences looking for a laugh this weekend.
- Twitter activity has shown significant improvement this week.

- Johnny Depp's drawing power has taken a hit in recent years.
- Unfortunately, with such a busy frame last weekend, any new release will have a hard time finding a sizable audience right now.

- The Disney and Lucasfilm names bring some potential drawing power to the table.
- A voice cast of relatively well-known names gives it some commercial appeal.

- The late release announcement has resulted in lower awareness than Disney releases typically receive.
- With Paddington performing well and receiving strong word of mouth, many families are likely to opt for that flick.

Below is our complete weekend forecast.