Weekend Forecast: 'The Divergent Series: Insurgent', 'The Gunman', & 'Do You Believe?' 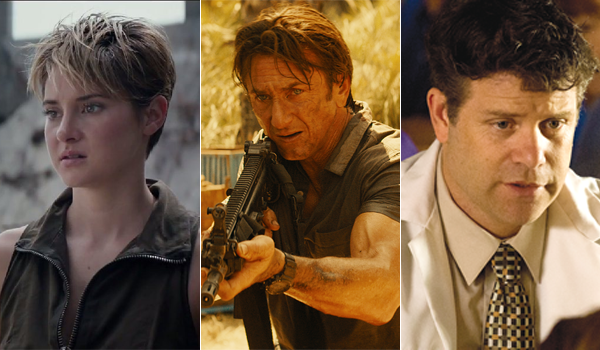 Three new films are set to open in wide release this weekend. Our analysis:

- Last year's first film proved to find a solid audience, boasting somewhat strong legs for a young adult adaptation.
- The increased presence of Miles Teller in the trailers could be an asset thanks to his recent media presence due to Whiplash and Fantastic Four.
- The addition of 3D and IMAX for this installment should boost the average ticket price paid.
- Twitter and Facebook buzz have shown noticeable growth over the first flick.

- Early reviews are rather disappointing, which could turn off most casual viewers.
- The positive word of mouth for Cinderella might be another hindrance as the two films compete for female audiences.
- Marketing has been hit and miss overall, featuring trailers that often fail to successfully convey the point and purpose of this sequel's story.

- A fairly aggressive ad campaign has raised awareness to a moderate level.
- "From the director of Taken" could have its pull, mainly among older crowds.

- Social media activity is weak, drawing less than one-quarter the amount of Twitter buzz as Run All Night did last week.
- Sean Penn's controversial remarks at the Oscars haven't endeared him to everyone.

- Christian-themed movies really hit their mark last year, including God's Not Dead whose producers are also attached here. Will that goodwill carry over?
- The cast of recognizable names and faces should help with mainstream appeal, albeit not by much.

- Marketing hasn't been as strong for this release as other Christian-themed films.
- It's been a while since a faith-based film became a hit; are we due?

Tags: predictions, The Divergent Series: Insurgent, Do You Believe?, The Gunman