Weekend Forecast: 'Inside Out' & 'Dope' 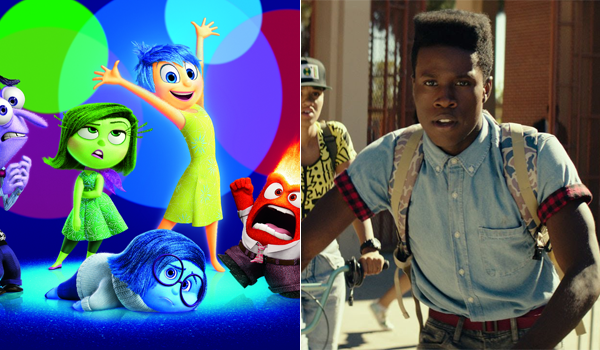 Two very different films aim for their share of the summer market this weekend, but will Pixar's latest be able to take a bite out of the surprise juggernaut Jurassic World? Not likely, but it's still in for a strong debut in its own right. Our analysis...

- There's been an uncommon two-year gap between Pixar films, not to mention three months since the last animated film (Home) to play in theaters. Family demand should be high.
- Early reviews are ecstatic, suggesting the film is one of Pixar's best yet, while buzz out of the movie's CinemaCon screening in April was equally enthusiastic.
- Buzz on Twitter and Flixster is noticeably stronger than that of Disney's Big Hero 6 at the same point in the release cycle.

- The breakout phenom that Jurassic World has become could hamper opening grosses with that film catering heavily to family audiences. Parents with younger children will still drive Inside Out, though.
- Facebook buzz is healthy, although the film totals fewer fans than Big Hero 6 or Sponge Out of Water did.
- The film's premise could easily a stronger attraction to adults upfront, not unlike past "mature" Pixar offerings like Ratatouille and WALL-E.

- A wave a great buzz has preceded the indie sleeper's release, including strong reviews.
- Twitter activity is considerably more impressive than Top Five, and on par with The DUFF.
- Every summer delivers at least one sleeper hit catering to an under-served audience, and this one looks to do just that in the long run.

- With just over 100,000 fans in total, Facebook has been a late bloomer. Flixster anticipation also leaves something to be desired.
- Although aiming for a very different audience, it's still wise not to discount the effect of a strong holdover like Jurassic World on any film.
- The film's primary source of business may come from major coastal cities, particularly in California. Without expanding, that will limit breakout potential for opening weekend.

BoxOffice projects this weekend's top ten films will amass a strong $211.9 million market total. That figure would be 56 percent up from the same frame last year when Think Like a Man and Jersey Boys opened over a weekend whose top ten tallied $135.8 million.