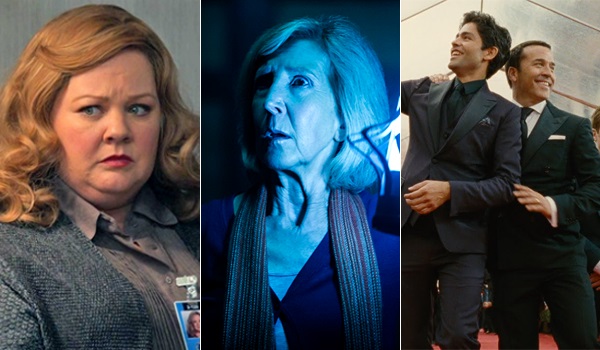 The summer box office heats up this weekend with three new major players kicking off June.

- Melissa McCarthy has quickly evolved into a bona fide star over the last few years.
- Director Paul Feig's track record has also impressed with the likes of Bridesmaids and The Heat.
- Early buzz out of the film's CinemaCon screening in April, plus critical reviews, have been excellent. Strong Twitter and Flixster activity complement that.
- As both a female-led comedy and an actioner with a varied ensemble cast, there's something for everyone.

- McCarthy's rise to stardom has delivered one or two critical duds, causing minor concern for her being over-exposed too quickly.
- The crowded summer market should mean more backloading as opposed to a monster opening.
- Online buzz has been modest on Facebook.

- As one of the reigning tentpole horror franchises around, fans are expected to turn out.
- The previous film came close to the September record with its $40.3 million debut in 2013.
- It's been a slow year for horror fans, so this might be the one to bring them back out to theaters.

- Franchise fatigue could be setting in at this point, especially with the film's nature as a prequel and lacking the main stars of the first two.
- Twitter activity has fallen well behind that of Ouija and Annabelle during comparative points before release.
- The busy weekend slate will certainly scatter out audiences.

- The show was a mainstay hit on HBO for eight seasons, meaning there's definitely a built-in audience.
- The cast of cameos featured in marketing could entice casual/first-time viewers.
- Social media activity has been impressive: the franchise boasts nearly 4 million Facebook fans, while Twitter buzz has started to perk up in recent weeks.

- Ultimately, the show's appeal is fairly niche and probably even a little too "inside baseball" for the uninitiated.
- Flixster activity is noticeably behind that of A Million Ways to Die in the West.
- Critics' reviews are heading south, further suggesting the potential for front-loading by fans of the show.

For the weekend's top ten, BoxOffice forecasts a $144.3 million haul. That would represent a 6.2 percent decline from last year's $153.8 million tally over the same frame when The Fault In Our Stars and Edge of Tomorrow debuted to $48 million and $28.8 million, respectively.