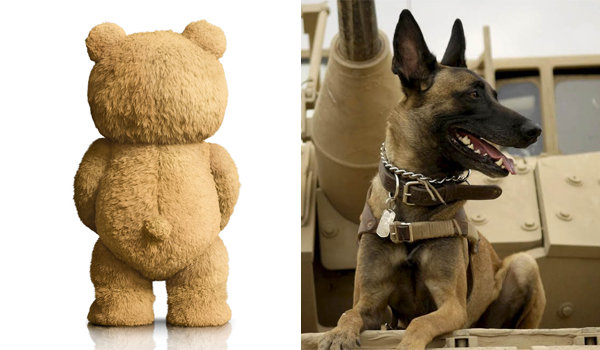 The final weekend of June gives us Seth MacFarlane's sequel to 2012's smash hit Ted, plus a possible sleeper in the family-friendly Max.

- The first film stands as the fourth highest grossing R-rated comedy of all-time, earning $54 million in its opening and $219 million domestically overall.
- MacFarlane's fan base will likely turn out again as the film's trailers promise more of what they've come to love about his style.
- The franchise boasts a stellar 21.8 million fans on Facebook entering Wednesday, one of the highest totals of any series.
- The lack of any comedies directly appealing to male audiences so far this summer should also help.

- Although well-received at the time, the first film's popularity has tapered off a bit over the past three years. Did they wait a year too long for the sequel?
- Last year's flop A Million Ways to Die in the West didn't exactly do MacFarlane's drawing ability any favors among fans or casual viewers.
- The competition in the market (namely Jurassic World still) could soften opening weekend grosses, especially with early negative reviews that could put off some of the target audience's interest.
- Across most metrics like Twitter, Flixster, and traditional tracking, signs point to less enthusiasm than 22 Jump Street received around this same time last year.

- Promoting credits like "from the director of Remember the Titans and producer of Marley & Me" could strike a chord with audiences looking for a heartfelt crowd-pleaser.
- The film's Twitter and Facebook activity are on par with last year's Earth to Echo, respectable for a low-budget flick.
- This could strike a chord with middle America viewers thanks to the film's military connection.

- With Inside Out performing far above even optimistic expectations, Max will have a hard time grabbing the family audience this weekend.
- Flixster activity is noticeably behind the pace of Earth to Echo.
- Awareness levels for the flick are fairly low, which could just translate to more staying power if its target audience spreads solid word of mouth in the days ahead.