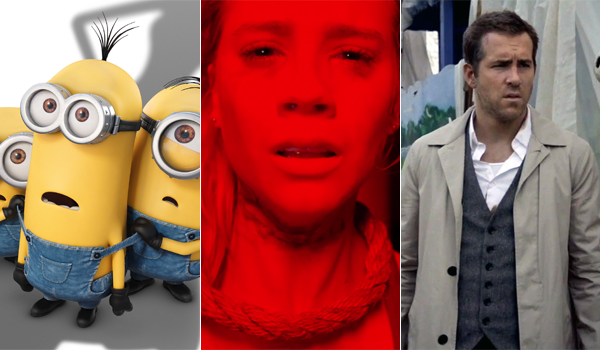 Three new releases hit theaters this weekend, and one in particular looks to make a big splash in what's already been a historic summer.

- Spinning off the most popular characters (by far) from the Despicable Me films isn't just smart, it's timely with only two years having passed since their last appearance on-screen.
- The film's overseas launch has already done excellent business, something that should translate similarly to North America.
- Twitter, Facebook, and Flixster activity have all impressed.

- Reviews indicate this entry in the franchise won't be as well received as the Despicable flicks, but that probably won't affect the opening weekend in a major way considering the target audience.
- It's possible that social media activity (particularly Twitter) is inflated by the film's advance overseas release.
- Did Pixar's Inside Out steal some blockbuster thunder from this flick as the former continues to hold very well since its record opening?

- The sheer lack of horror hits in 2015 leaves the space wide open for something to connect with fans of the genre.
- Twitter activity is notably strong this week.
- The film's Facebook page has grown at a healthy rate in recent weeks, although overall fan totals are still very modest.

- Reviews don't suggest this will be the movie to breakout for the horror genre, especially since its audience pays very close attention to early reactions.
- Flixster buzz is very poor, posting the fewest votes of any major horror film in wide release this year.
- In a busy summer, it's likely this film is overlooked and/or skipped until the post-theatrical market.

- Adults looking for something other than a summer blockbuster might opt for this.
- This year's been kind to smaller profile films in the sci-fi genre finding an audience.

- Ryan Reynolds isn't known for his ability to draw at the box office.
- Social media activity leaves much to be desired across the board.
- Reviews aren't in the film's favor, making matters worse given its already-low profile.

BoxOffice forecasts this weekend's top ten films will accumulate approximately $196.6 million. That would represent a 47 percent improvement from the same frame last year, which rang up $133.8 million -- driven by the excellent $72.6 million debut of Dawn of the Planet of the Apes.