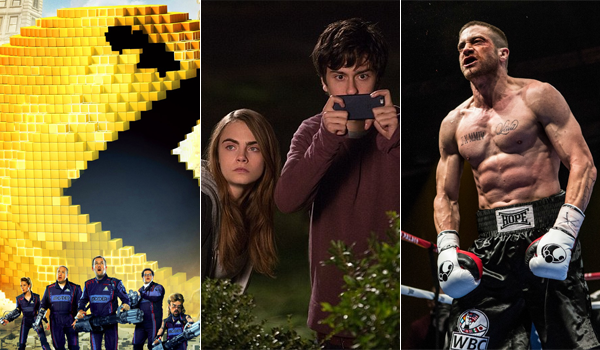 This weekend will see three new wide releases vie for a piece of the hot summer market.

- Regardless of industry criticism, Adam Sandler still boasts a notable family audience that typically show up for his more accessible films.
- The recent wave of nostalgia-driven box office successes could carry over to this pic with multi-generational appeal.
- Flixster and Facebook activity are encouraging for what is, technically, a non-franchise/non-sequel film.

- Sandler's audience has nevertheless diminished in recent years, with the Grown Ups films being the exceptions to that rule.
- In an already fairly crowded summer, audiences may not view Pixels as a need-to-see type of movie.
- Twitter activity leaves much to be desired.

- Author John Green has quite a few young adult fans thanks to last year's hugely successful The Fault In Our Stars.
- In general, young adult films are still strong properties right now.
- With nearly 1.4 million Facebook fans and strong Twitter movement this week, there's definitely a young audience out there for this.

- Shailene Woodley's popularity was increasing at the right time before Fault last year. Unfortunately, neither of the two stars here are in quite the same league of recognition yet.
- Flixster activity is relatively soft for the genre.
- With so much competition in the market, this could have a hard time breaking out beyond the core teen demo.

- Adults looking for something other than a popcorn movie may find a welcome reprieve in this.
- Jake Gyllenhaal continues to take on challenging performances, something his fans will probably turn out for.
- Twitter buzz is increasingly strong.

- Reviews are heading in the wrong direction, which unfortunately could hurt the film's outlook before it even opens.
- Flixster and Facebook activity haven't done much to impress.
- Marketing for the somewhat under-the-radar summer release has been modest.

We're forecasting a $169.4 million gross from this weekend's top ten films. That would represent a 28 percent increase from the same frame last year, which generated $132 million and was led by newcomers Lucy ($43.9 million) and Hercules ($29.8 million).