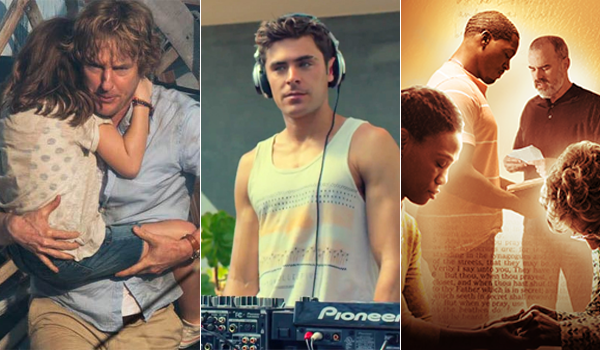 August comes to a close this weekend with the release of three new flicks. Will any of them be able to unseat Straight Outta Compton from first place? (Probably not.)

- High profile names such as Owen Wilson and Pierce Brosnan give a little help to this otherwise under-the-radar release.
- Twitter and Flixster activity are comparable to that of last August's The November Man.

- Overall social media activity is lacking, particularly on Facebook where it boasts less than 25,000 fans.
- Unfortunately, neither Wilson nor Brosnan are exactly box office draws these days.

We Are Your Friends

- Zac Efron has a considerable fan base of young audiences out there. The question is whether or not they'll show up.
- As is to be expected, Twitter and Facebook activity are respectable -- although the latter trails that of That Awkward Moment.

- Awkward Moment similarly tracked well online and was ultimately hurt by poor reviews (as this film is receiving so far).
- With many schools starting back this time of year, Efron's core fans are likely done with summer movie trips for a few weeks.

- Coming from the filmmakers behind the successful Fireproof and Courageous is a definite strong point in a market that's lacked a faith-based hit for awhile.
- Boasting over 524,000 Facebook fans is impressive considering the limited promotion.

- Grassroots marketing seems to be the driving force here, so it'll be up to church crowds to turn this into a hit.
- Flixster and Twitter movement aren't particularly noteworthy.

BoxOffice projects this weekend's top ten films will tally $63.1 million. That would represent a 24 percent decline from the same frame last year, whose $82.8 million take was boosted by Labor Day weekend and led by Guardians of the Galaxy and Teenage Mutant Ninja Turtles ahead of openers The November Man and As Above/So Below.

Tags: We Are Your Friends, No Escape, War Room, predictions